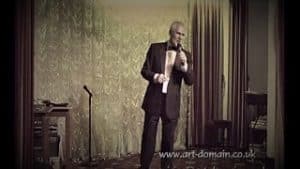 I have been in the entertainment industry since about 1997 as a vocalist.

I thought I’d put together my thoughts, ideas, practical points and experiences as  an ‘improving acoustic guitar player’

This photo shows the style of entertainment before I took up acoustic guitar:  I no longer use backing tracks.

Sorry that my website is still incomplete! - work in progress!

DISCLOSURE: As an affiliate, please be aware that the author receives commission on sales through any links on this page but at no cost to the buyer.

I guess it was about 1997 that I was introduced to performing live, by a close friend who was already on the circuit.I remember those days well . . . . using 1/4″ cassette tapes which quite often got mangled during use “squirm”.

Then along came Sony with the Minidisc – which was a real relief for all artists using backing tracks.Of course there was the Philips digital tape machine as well, and like lots of things I’ve jumped into over the years it was a miserable failure and I ended up buying a Minidisc unit.

For a couple of years I also enjoyed being a member of the Hull charity singing group – “Society of MICE”  (Men In Charitable Endeavors).  A group I have great respect and admiration for; raising funds for many different charities.

I started performing as a solo artist in about the year 2000 and for several years my bookings were at hotels and clubs on the East Coast of Yorkshire and sometimes south of the Humber.

I have to confess that a few years ago, I had the idea of taking guitar up and performing at gigs:  unfortunately, I didn’t rehearse well enough and my performances were – how shall I put it – inadequate lol.  Indeed, I lost gigs and only had myself to blame.

So not surprisingly, I developed a phobia about ever going live with the acoustic guitar again.  However, after a few years break I took up the guitar again and have tried to be consistant in practicing every day with repetative exercises for “muscle memory” retention.

That gave me the idea of setting up a website for those interested in playing guitar.  Quite clearly, the site is aimed at people just learning – or who can perform moderately well enough to join a group.

So there we are; a brief oversite of me as an entertainer.  I hope that when I get my cover songs uploaded, they provide inspiration to others to have a go – you just have to keep practicing and practicing every day (without fail folks!).